Chem Trails: What is wrong with our skies?

If you believed that aircraft, with secret government approval, had been spraying us with noxious chemicals developed in U.S. military biological warfare laboratories, would you be paranoid?

Or if you saw distinct plumes or "Chem Trails" left behind by the aircraft which did this spraying, yet were told by Transport Canada that no such spraying was taking place, would you be delusional? . . or a conspiracy theory lunatic?

You'd be quite rational according to William Thomas, who has studied the Chem Trails phenomenon.

Thomas is an award-winning journalist and author of a book about "Gulf War Syndrome", the strange cluster of illnesses linked to a deterioration in the auto-immune system suffered by troops who received anthrax immunization before being deployed in the first Gulf War in the early 1990s. Today he argues, the same illnesses are showing up in North America caused by Chem Trails.

Perhaps Thomas is a fraud. Perhaps his photographs and videotape evidence are all fakes. Nevertheless, we're told now that Project Censored (U.S.A.), a respected media watchdog group, has judged Chem Trails to be one of the most under-reported stories of the past year. And, many of you claim to have seen, photographed and videotaped these Chem Trails and have sent some of this evidence to working TV. 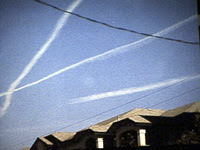 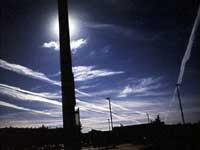 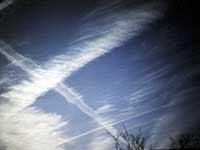 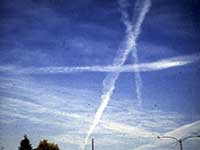