The woman claims two men were rude and verbally aggressive with her at her front door.

Jake Whittenberg reports the woman says they wanted her vote and they'd do anything to get it. 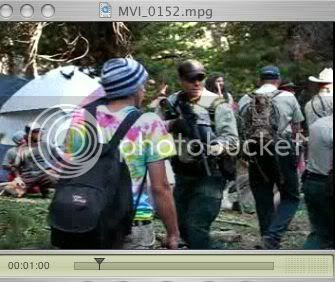 As a result of a number of press articles regarding conflicts at the 2008 Rainbow Family Gathering in Wyoming the Wyoming Chapter of the American Civil Liberties Union requested complaints, narratives or reports regarding individuals experiences at The Gathering. We were particularly interested in a conflict that occurred in “kiddy village”. Kiddy village is an area set-aside for those participants that have children and is particularly directed to children’s experience.

There are no official Rainbow Family representatives, documents or incorporations. It is my understanding they have been gathering since the 1970’s and generally believe in non-violence and alternative lifestyles. They gather once a year in national forests to pray for the planet and for peace.

The accounts of the experiences of individuals at this years gathering came from a number of sources: many of the reporters were long time Rainbow Family members and participants, some were casual or first time attendees and others Wyoming residents that just wanted to see “what was going on.” Among our reporters were doctors, lawyers, National Guard members, a nurse, and a retired carpenter from Lander. One of the telling items in all of the reporting was how similar the experiences were. The similarities maintained=0 Adespite the date, time, number of people reporting, age, or place of occurrence. These similarities in experiences and allegations provided an added element of validity to the reporting.

The USFS has stated that they are simply at the gatherings to “handle the perimeter” and to deal with “specific problems”. The reality of their presence seems very different however.

CBS News: Michael Connell was told NOT TO FLY
and that his plane may be SABOTAGED !

Last update: 8:27 a.m. EDT Oct. 7, 2008
WASHINGTON, Oct 07, 2008 /PRNewswire-USNewswire via COMTEX/ -- Velvet Revolution ("VR"), a non-profit dedicated to clean and accountable government, today calls for Republican candidate John McCain to fire computer expert Michael Connell from his campaign for covering up alleged election manipulations of Karl Rove and others. Mr. Connell, the GOP's top computer expert, was subpoenaed based on a September 19th court order to testify under oath in an Ohio federal lawsuit looking into serious allegations that Mr. Rove has directed a strategy to illegally manipulate elections through the use of computer technology. Rather than cooperate in the investigation, Mr. Connell hired attorneys close to the Bush/Cheney Administration and refused to appear for the deposition arguing client (GOP) confidentiality. Those attorneys have said that they will do everything possible to keep Mr. Connell from testifying before the November general election.
Mr. Connell's refusal to comply with a federal subpoena looking into credible evidence that the upcoming presidential election will be manipulated is at odds with John McCain's promise to run a clean campaign. Another GOP cyber security expert, Stephen Spoonamore, has stated that Mr. Connell has vast experience and knowledge of the GOP computer networks at issue in the federal lawsuit. Mr. Connell has admitted to Mr. Spoonamore "that in his zeal to 'save the unborn' he may have helped others who have compromised elections."
Cliff Arnebeck, the Ohio election attorney who issued the subpoena, said Friday that he is aggressively moving to enforce the subpoena. "Mr. Connell has information about how the votes are tabulated in key states in the upcoming election. In order to ensure that the election is fair and accurate, Mr. Connell needs to testify under oath and pursuant to a lawful subpoena about how these votes are tabulated, whether the tabulation will be compromised and whether anyone has directed him to compromise those tabulations."
According to federal filings, Mr. Connell is working for John McCain to help him win the election. VR believes that unless Mr. Connell testifies under oath about his apparent knowledge of election manipulations, Mr. McCain should fire him. If he does not, the McCain campaign will appear to be in league with Mr. Connell to cover up criminal conduct and engaging in election tampering. This will call into question the results of the November election and again cast a shadow over our election process.
CONTACT: Ilene Proctor, Ilene Proctor PR, (310) 271-5857
SOURCE VelvetRevolution.us
Posted by JRohio at 6:22 AM

THIS IS AN INTERNET ARCHIVE MIRROR
OF A GREAT SITE (radioscanning.wox.org)