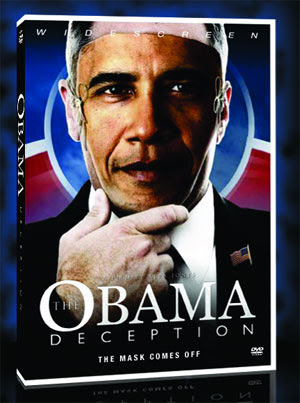 The Obama Deception is available at
PrisonPlanet.tv and Infowars.com.


The Obama Deception is a hard-hitting film that completely destroys the myth that Barack Obama is working for the best interests of the American people. The Obama phenomenon is a hoax carefully crafted by the captains of the New World Order.

He is being pushed as savior in an attempt to con the American people into accepting global slavery. We have reached a critical juncture in the New World Order's plans. and only by exposing the con can we help to save freedom in America.

The Obama Deception is not about Left or Right: it's about a One World Government. The international banks plan to loot the people of the United States and turn them into slaves on a Global Plantation.

Covered in this film: who Obama works for, what lies he has told, and his real agenda, and how his initial appointments and actions prove he serves the corporate oligarchs, not the American people. If you want to know the facts and cut through all the hype, this is the film for you.

• Obama is continuing the process of transforming America into something that resembles Nazi Germany, with forced National Service, domestic civilian spies, warrantless wiretaps, the destruction of the Second Amendment, FEMA camps and Martial Law.

• Obama's handlers are openly announcing the creation of a new Bank of the World that will dominate every nation on earth through carbon taxes and military force. International bankers purposefully engineered the worldwide financial meltdown to bankrupt the nations of the planet and bring in World Government.

• Obama plans to loot the middle class, destroy pensions and federalize the states so that the population is completely dependent on the Central Government.

• The Elite are using Obama to pacify the public so they can usher in the North American Union by stealth, launch a new Cold War and continue the occupation of Iraq and Afghanistan.

The information contained in this film is vital to the future of the Republic and to freedom worldwide. President Barack Obama is only the tool of a larger agenda. Until all are made aware, humanity will remain captive to the masters of the New World Order.

ANDY GOTTESMAN/THE LANTERN
President Barack Obama personally congratulates each of the 25 graduates of the Columbus Police Training Academy at the Aladdin Shrine Center on Friday. The recruits' jobs were saved from city budget cuts because of a $787 billion stimulus package passed last month.
Six weeks ago, the men and women of the Columbus Division of Police's 114th recruit class learned that they would not be sworn in as officers because of city budget cuts.

Friday, they were sworn in before President Barack Obama and a crowd of hundreds at the Aladdin Shrine Center in a ceremony that Columbus Mayor Michael B. Coleman called "a graduation for the ages."

The recruits' reversal of fortune was made possible by the American Recovery and Reinvestment Act, passed by Congress last month. The $787 billion stimulus package included $1.25 million to pay the salaries of the 25 recruits for one year.

"This is our nation's stimulus package at work, people," Coleman said in his remarks at the ceremony.

The act will put back to work many of the 4.4 million people who lost their jobs in the current recession, but by itself, the plan "won't turn our economy around or solve every problem," Obama said in his remarks.

"This police force still faces budget challenges down the road."

The services of the recruits are vital to Columbus, Obama said.

"This city of Columbus needs the courage and the commitment of this graduating class to keep it safe, to make sure that people have the protection that they need," Obama said. "This economy needs your employment to keep it running."


The sacrifices and commitments made by the recruits are "the very essence of responsibility," Obama said. "That's the spirit we need in this country right now, no matter what our role is or what our profession that we've chosen. It's a spirit that asks us to look beyond our own individual ambitions to the wider obligations we have as the good citizens of a great nation."

ABIGAIL MINER/THE LANTERN
President Obama and one of the pilots of Air Force One salute the crowd assembled at the Port Columbus International Airport.
Officer Joshua Van Dop, orator for the 114th recruit class, echoed Obama's theme of responsibility in his remarks.

"Much has been given to us, and now much is expected of us," Van Dop said.

Obama also announced the availability of $2 billion in Justice Assistance Grants from the American Recovery and Reinvestment Act, which he said would be allocated to "worthy programs that have been carefully planned and proven to work." Obama cited police departments in Savannah, Ga., Long Beach, Calif., West Haven, Conn., and the state of Iowa as examples of deserving grant recipients.

Dan McKeever can be reached at mckeever.16@osu.edu.