Ohio is about to give police more leeway than most states to
force a blood or urine test on certain people suspected of drunken driving
Posted by JRohio at 8:25 AM

I don't know what happened there, but suicide is not it!

The Jerusalem Post reports that the IDF soldier "fell from a vantage point he was occupying on a high building and a bullet misfired from his gun."

YnetNews says on its website that the soldier is in critical condition. "The soldier, who was part of the honorary
guard, was reportedly wounded when a gun misfired. The incident is
under investigation," the publication says.

Security forces scrambled to protect French First Lady Carla Bruni and her husband Nicolas Sarkozy today after an Israeli border guard shot himself in the head at a ceremony they were attending.

A police spokesman, Micky Rosenfeld, denied reports that there had been an assassination attempt on the French leader. 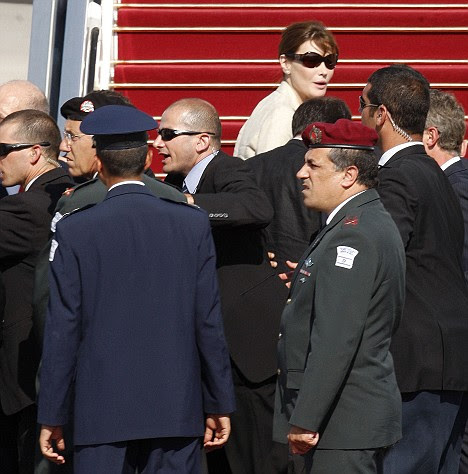 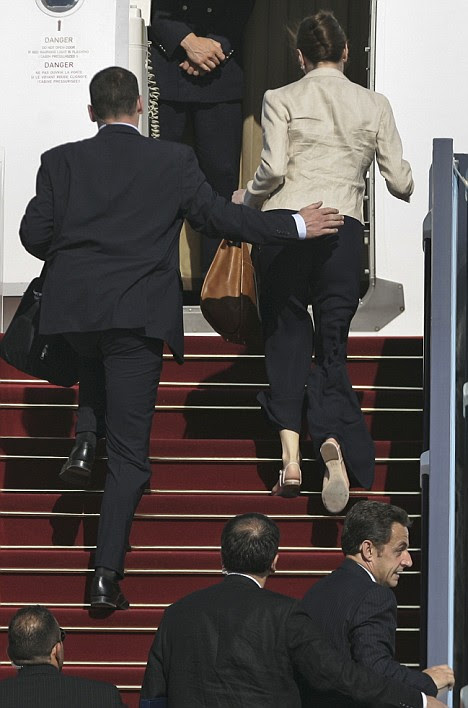 The incident marred Sarkozy's three-day trip to Israel, a visit meant to improve relations between the two countries.

Israel Radio said the soldier who was shot was stationed 100 metres to 200 metres (yards) away from the plane. He shot himself as a band was playing. Two women soldiers who witnessed the shooting fainted and were treated by medics.

Police say there was no assassination attempt on Sarkozy. 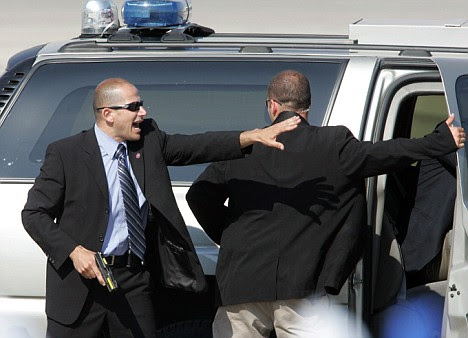 "This is a blatant violation of the calm, and we will weigh options," an aide quoted Israeli Prime Minister Ehud Olmert as saying after the rockets struck.

The Egyptian-brokered truce, which took effect last Thursday, calls on Hamas to prevent cross-border fire from the Gaza Strip, which it seized by force a year ago.

Islamic Jihad claimed responsibility for the rocket attack, calling it a "first response" to Israel's killing overnight of a local commander of the militant group and another Palestinian, who was affiliated to Hamas, in the West Bank city of Nablus.

Sami Abu Zuhri, a Hamas official, responded by urging "all Palestinian factions to abide by the calm agreement", adding: "Hamas is keen to maintain the deal."

The ceasefire, under which Israel agreed to halt its own operations in the Gaza Strip and to ease its economic blockade of the impoverished enclave, does not apply to the West Bank. 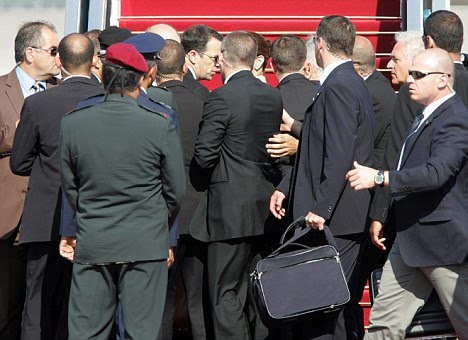 An Israeli police spokesman said at least three makeshift rockets were fired from the Gaza Strip and one hit a house in the border town of Sderot. No one was seriously hurt.

The rockets landed in Israel only hours after Olmert thanked Egyptian President Hosni Mubarak in talks in Egypt for brokering the ceasefire, which came into effect on Thursday.

The Nablus operation was the first fatal Israeli raid since the truce took hold in Gaza. Similar West Bank operations and Palestinian rocket attacks from the Gaza Strip led to the breakdown of previous truce deals.

Islamic Jihad said Tarek Juma Abu Ghali, killed in Nablus, was one of its most senior commanders in the northern West Bank.

Nablus Governor Jamal Muheisen called the raid in the city an "unjustified crime" but said he did not believe it would threaten the Gaza truce.

Officials on both sides said from the start that they doubted the truce in the Gaza Strip would last.

TEL AVIV (Reuters) - An Israeli guard on the perimeter of a farewell airport ceremony for French President Nicolas Sarkozy shot himself dead on Tuesday, causing a security stir but not endangering the visiting leader, police said.

"This was in no way an assassination attempt," police spokesman Micky Rosenfeld said. "A border policeman ... committed suicide during the farewell ceremony."

Bodyguards hustled Sarkozy and his wife, Carla Bruni-Sarkozy, into their plane at Tel Aviv's Ben-Gurion Airport after the shot was heard. Other security men whisked Israeli Prime Minister Ehud Olmert toward his car.

Olmert and Israeli President Shimon Peres, who was also at the scene, returned to the aircraft to bid the Sarkozys a final goodbye after it was established that the incident was over and posed no threat. The plane then departed.

According to Rosenfeld, the guard who shot himself was a paramilitary policeman and had been assigned to a security patrol at the airport.

Israel Radio said the guard was stationed 100 meters to 200 meters (yards) away from Sarkozy's plane. Two women soldiers who witnessed the shooting were treated for shock, the radio said.

Dark-suited men quickly ushered Sarkozy and his wife up the stairs of their plane. At the same time, security guards with guns drawn rushed Olmert and Israeli President Shimon Peres toward their cars.

In a panic, Sarkozy's wife, Carla Bruni-Sarkozy, rushed up the stairs ahead of her husband.

The shooting occurred while a military band was playing, and the leaders apparently didn't hear anything.

The incident was over within minutes, and Olmert boarded the plane to inform Sarkozy what had transpired, witnesses said.

Police spokesman Shlomi Sagi confirmed that a policeman guarding the airport committed suicide just as Sarkozy was about to board his plane.

Officials said he shot himself in the head.

Another police spokesman, Micky Rosenfeld, said there had been no assassination attempt on the French leader.

Sarkozy's three-day trip to Israel was meant to improve relations between the two countries.

Israel condemned the attack as a "gross violation" of the truce, but did not say whether it would retaliate.

The barrage wounded two people and capped a day of violence that presented the truce with its first serious test.

Just before midnight, Palestinian militants fired a mortar shell into an empty area in southern Israel. And in a pre-dawn raid, Israeli troops killed two Palestinians in the West Bank city of Nablus.

Islamic Jihad, a small armed group backed by Syria and Iran, claimed responsibility for the rocket fire. Although the West Bank is not included in the truce, the group said the Nablus raid had soured the atmosphere of calm.

"We cannot keep our hands tied when this is happening to our brothers in the West Bank," the militant group said.

Hamas spokesman Sami Abu Zuhri said the rocket attack came because of "Israeli provocation this morning" and added that Hamas was "committed to the calm." He said Hamas will talk with other factions and make sure they are committed, too.

The Egyptian-brokered truce went into effect Thursday. The immediate aim was to end fighting that has killed seven Israelis and more than 400 Palestinians — many of them civilians — since Hamas gained control of Gaza a year ago.

It also obliges Israel to ease a punishing blockade of the coastal strip.

In a final stage, the sides are to address Hamas' demand to reopen a major border passage between Gaza and Egypt and Israel's insistence that Hamas release an Israeli soldier it has held for two years.

The cease-fire is meant to avert an Israeli invasion of Gaza, a tiny, impoverished seaside territory of 1.4 million people that Israel evacuated in 2005 after a 38-year military occupation.

The deal extends beyond Hamas to all militant groups operating in Gaza but does not include the West Bank.

Egypt acted as middleman for the six-month truce because Israel, like much of the international community, shuns Hamas for refusing to recognize Israel or renounce violence.

Upon entering the meeting in the Red Sea resort of Sharm el-Sheik, Mubarak said the two would discuss efforts to release the Israeli soldier, Sgt. Gilad Schalit. Olmert hailed Egyptian efforts to end attacks on Israel from Gaza.

Israel has pressed Egypt to crack down on arms smuggling from Egypt's Sinai desert into Gaza.

On Tuesday, Olmert was quoted in the London-based Al-Sharq Al-Awsat daily as saying that if the smuggling did not end, then Israel would consider the cease-fire agreement violated, and "we will be compelled to military action."

Early Tuesday, Israeli troops killed a senior Islamic Jihad commander in a raid in the West Bank town of Nablus.

A neighbor said a Palestinian bystander was also shot to death by troops when he opened the door of his apartment during the raid. The Israeli military said the man was a militant killed during a gunbattle with troops.

Islamic Jihad said the commander of its northern West Bank operations, Tarek Juma, was killed in the operation.

The military said Juma was targeted because he was planning an attack on Israel. Troops found explosive devices and munitions in his apartment, it said.

Fayyad, whose government is trying to negotiate a peace deal with Israel, has said continuing military operations are undermining efforts to have Palestinian security forces restore law and order in the West Bank.

This was "an example of the kind of activity that has to stop and has to stop immediately and promptly if we are going to succeed in providing security to our people," said Fayyad, who is attending an international conference aimed at bolstering his security forces. "There was absolutely no exchange of information on this particular incident."

Also Tuesday, the Hamas military wing took responsibility for a shooting in the West Bank last week that injured three Israeli hikers. The claim was sent in a text message to Gaza journalists.

Confusion has marred French President Nicolas Sarkozy's farewell to Israel, after a soldier shot himself dead during an airport departure ceremony.

Mr Sarkozy and his wife, Carla Bruni, were rushed into their plane after the shot. Israeli Prime Minister Ehud Olmert was also hurried to safety.

The incident at Ben-Gurion airport came at the end of Mr Sarkozy's three-day visit to Israel and the West Bank.

A police spokesman said the security officer had committed suicide.

Spokesman Micky Rosenfeld said the incident, which happened just as Mr Sarkozy and Ms Bruni were about to board their plane, had posed no threat to the visitors.

He denied reports that it might have been an assassination attempt on the French president. Other reports suggested the soldier may have shot himself accidentally.

Witnesses said the incident was over within minutes and that Mr Olmert had then boarded the Sarkozys' plane to say farewell and explain what had happened.

Israel Radio reported that the soldier had been stationed on the perimeter of the airport, some 100m to 200m (330 - 660 feet) from the Sarkozys' plane, when he shot himself as a band played.

Television footage showed the French president and his wife being hustled up the steps into the aircraft.

Israeli President Shimon Peres, who was also present for the farewell ceremony, was also taken to his armoured car.

Mr Sarkozy's visit was intended to improve relations between France and Israel.

He also held talks in the West Bank on Tuesday with Palestinian leader Mahmoud Abbas.

Speaking after the meeting, Mr Sarkozy voiced his support for the creation of a Palestinian state.

"The security of Israel is non-negotiable for France, but the creation of a viable, democratic, modern state for the Palestinians is a priority for France," he said.

He also repeated his call for Israel to halt its building of settlements in the West Bank.

It came a day after he told Israeli politicians in the Knesset that there would be no lasting Middle East peace without a freeze on Jewish settlement construction on Palestinian land.

Mr Abbas said the Palestinians were "relying a great deal on the European role" in the peace process, particularly as France takes on the rotating European Union presidency next month.