They blogged about its doom across the web,
they chatted about it in the chat rooms.

It was a sick joke. Now Gone in 11 months of operation.

If one investor,
(and consider yourselves one Franklin County and
City of Columbus residents)

would have asked experts on the airline.com web site
if Sky Bus had a chance, they would have known this
outcome before it happened. The industry experts and the
business man all had many, many reasons why this company
would fail.

Point one from an amateur is :

Did the fuel cost issues with airlines just happen?
Of course not, who did not see that as the sign of
eventual doom ?

I am sorry to say, we been had. Your tax dollars,
your jobs were part of a planned folly. Our city has
been embarrassed nationwide.

I also question who had the most gain?

Who made the most money from this corporate caper?

In an effort to attract the airline to the city, as well as support its growth

early on, the city of Columbus, along with the

business loans, and marketing support. Most of the incentives were performance-based,

which required Skybus to create 1000 jobs and complete other milestones to receive the incentives.[33] Incentives such as airport improvements, however, were already completed. When Skybus began operations, they took advantage of $11 million of improvements to their gates in Concourse B at Port Columbus. 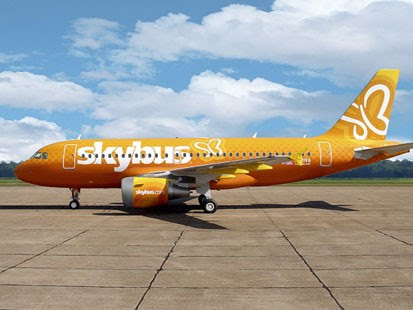 Skybus, ATA and Aloha Airlines have stopped flying
in the past week

Another carrier bites the dust – this time, it’s
Skybus Airlines
THE NEWS TRIBUNE
Published: April 5th, 2008 01:00 AM
Low-cost carrier Skybus Airlines is shutting down today and
plans to file for bankruptcy
protection next week, becoming the latest of the nation’s airlines
to fail because of rising fuel costs and a slowing economy.

The financial situation of the airline, which announced the


Travel insurance of no use to Skybus ticket holders

Talk about getting it wrong

Skybus struggled to overcome the combination of rising jet fuel costs and
a slowing economic environment.


Alex Jones delivering his celebrated rant from the critically acclaimed film
"Waking Life." Alex explains how we should cast aside our Establishment
designed concepts of the false left-right paradigm and focus on the real
issues. This groundbreaking 2001 rotoscoped animated feature was directed
by Richard Linklater and produced by Tommy Pallotta. It was the winner
of the National Society of Film Critics Award for "Best Experimental Film,"
the New York Film Critics Circle Award for "Best Animated Film," the
"CinemAvvenire Award" at the Venice Film Festival for "Best Film," and
nominated for the festival's main award "The Golden Lion."

U.S. Democratic senators and presidential hopefuls Hillary Clinton and Barack Obama are scheduled to join Arizona senator and Republican presidential hopeful John McCain as vice-chairmen of the National Committee for Israel 60th, according to a statement released by the Conference of Presidents of Major American Jewish Organizations on Friday. The National Committee for Israel's 60th, the planning committee overseeing Israel's 60th anniversary festivities, was organized by the Conference of Presidents in order to give official sponsorship to the dozens of events and ceremonies planned to take place throughout the United States in honor of the anniversary. -Haaretz

Girls out of polygamous sect

US authorities have removed 52 girls from a polygamous sect,

and say many have been abused.

King—Letter from a Birmingham Jail -

What Did Bill Clinton Do To Get $14.4M From Ron Burkle?
One big line item is missing from the Clinton tax return press summary:
the $15 million paid to Bill Clinton between 2003 and 2007 by
Ron Burkle's Yucaipa Global Opportunities Fund.

SONNY Bono, former husband and singing partner of superstar Cher, was clubbed to death by hitmen on the orders of drug and weapons dealers who feared he was going to expose them, a former FBI agent claims.

The state has settled a lawsuit alleging problems in the youth
detention system and now Ohio is making changes that involve
more guards and medical workers.
Posted by JRohio at 12:57 AM

If you are surprised about this you are NOT paying attention!

JACKSON, Mississippi (CNN) -- Girls as young as 13 say they were shackled for weeks at a time in Mississippi.

Erica was 16 when she was forced to wear leg shackles at a Mississippi detention center, she said.

A Texas teen was allegedly offered birthday cake in exchange for sex.

A guard drove his knee into the neck of a frail suicidal Ohio boy after the youth was wrestled to the ground and held down by other guards who stripped him and covered his face with a smock, a state report said.

More than two dozen girls at an Indiana lock-up describe "networking" -- their term for sneaking into each other's cells to have sex, with no interference from guards.

This is a glimpse into what America's juvenile jails look like, according to lawsuits, criminal cases and experts who have spent years delving into what they call a broken system.

"It's a nationwide crisis that has been going on for years, one the public has never been told the extent of," said psychiatric social worker Jerome Miller, the co-founder of the National Center on Institutions and Alternatives, who has evaluated and helped reform juvenile jails for more than three decades.

FROM MY BROWN EYED VIEW


A sistah like myself moves around all time looking at this world we live in.
I like looking in the past, the present, and into the future.
There is always something to focus in on.
This is the space where I plan to share my visions.

WASHINGTON - Members of Congress have as much as $196 million collectively invested in companies doing business with the Defense Department, earning millions since the onset of the Iraq war, according to a study by a nonpartisan research group.

Not all the companies in which lawmakers invested are typical defense contractors. Corporations such as PepsiCo, IBM, Microsoft and Johnson & Johnson have at one point received defense-related contracts, notes the report by the Washington-based Center for Responsive Politics. MORE
Posted by JRohio at 5:10 PM

Paris - What Would You Do?

Lyrics
Posted by JRohio at 9:50 AM

Neocon Memo Says Fourth Amendment Does Not Apply To Military Operations Within U.S.

NEW YORK – A newly disclosed secret memo authored by the Department of Justice’s Office of Legal Counsel (OLC) in March 2003 that asserts President Bush has unlimited power to order brutal interrogations of detainees also reveals a radical interpretation of the Constitution’s Fourth Amendment protection from unreasonable search and seizure. The memo, declassified yesterday as the result of an American Civil Liberties Union lawsuit, cites a still-secret DOJ memo from 2001 that found that the “Fourth Amendment had no application to domestic military operations.” MORE

I was Banned Again !! Record time! 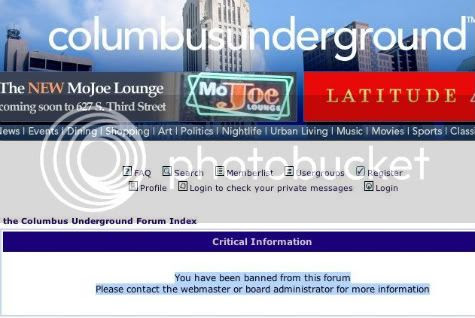 Low Graduation Rates in Many City School Districts, According to Report
Seventeen of the nation's 50 largest cities had high school graduation rates lower than 50 percent, with the lowest graduation rates reported in Detroit, Indianapolis and Cleveland, according to a report released Tuesday.

Nationally, about 70 percent of U.S. students graduate on time with a regular diploma and about 1.2 million students drop out annually.

Video Of Woman Pushed Down Stairs Prompts Calls For Charges Against Officer
Video showing a woman being pushed down some stairs by a police officer that led to a battery charge against the woman has prompted calls for charges against the officer.
Some homes worth less than their copper pipes
Thieves smashed the window to break in and then gutted the property for its copper pipes -- a crime that has spread across the United States as the economy slows and foreclosed homes stand empty and vulnerable.
VIDEO - Hillary Clinton's NAFTA Story Exposed
Hillary Clinton says she opposed NAFTA from the beginning. That's not what the record says.

On Dec. 10, 1974, the U.S. National Security Council under Henry Kissinger completed a classified 200-page study, "National Security Study Memorandum 200: Implications of Worldwide Population Growth for U.S. Security and Overseas Interests." The study falsely claimed that population growth in the so-called Lesser Developed Countries (LDCs) was a grave threat to U.S. national security. Adopted as official policy in November 1975 by President Gerald Ford, NSSM 200 outlined a covert plan to reduce population growth in those countries through birth control, and also, implicitly, war and famine. Brent Scowcroft, who had by then replaced Kissinger as national security adviser (the same post Scowcroft was to hold in the Bush administration), was put in charge of implementing the plan. CIA Director George Bush was ordered to assist Scowcroft, as were the secretaries of state, treasury, defense, and agriculture.

Pentagon: Colleges must hand over names
Under rules that will take effect April 28, defense officials said they want the exact same access to student directories that is provided to all other prospective employers.

Hersh: children raped at Abu Ghraib, Pentagon has videos
" Some of the worst things that happened you don't know about, okay? Videos, um, there are women there. Some of you may have read that they were passing letters out, communications out to their men. This is at Abu Ghraib ... The women were passing messages out saying 'Please come and kill me, because of what's happened' and basically what happened is that those women who were arrested with young boys, children in cases that have been recorded. The boys were sodomized with the cameras rolling. And the worst above all of that is the soundtrack of the boys shrieking that your government has. They are in total terror. It's going to come out."
The Facebook tool which turns your mobile into a snoop
The service, popular in Scandinavia, promises to provide users with a detailed map of their friends' locations, any time and anywhere. However, there are fears that Sniff could be abused by employers to remove the last vestiges of privacy from staff.
Posted by JRohio at 3:54 PM

Watergate-Era Judiciary Chief of Staff: Hillary Clinton Fired For Lies, Unethical Behavior
The now-retired general counsel and chief of staff of the House Judiciary Committee, who supervised Hillary when she worked on the Watergate investigation, says Hillary's history of lies and unethical behavior goes back farther - and goes much deeper - than anyone realizes.
Posted by JRohio at 3:51 PM

Rapists in the ranks
The stories are shocking in their simplicity and brutality: A female military recruit is pinned down at knifepoint and raped repeatedly in her own barracks. Her attackers hid their faces but she identified them by their uniforms; they were her fellow soldiers. During a routine gynecological exam, a female soldier is attacked and raped by her military physician. Yet another young soldier, still adapting to life in a war zone, is raped by her commanding officer. Afraid for her standing in her unit, she feels she has nowhere to turn.
Posted by JRohio at 3:46 PM