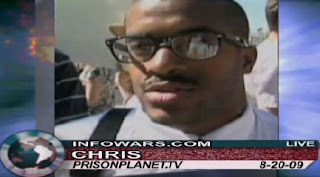 Chris , a person of color, and a freedom loving patriot,
whom made national news exercising his Open-carry
rights in Arizona at a Obama health care rally,
was interviewed by Alex Jones .


related articles /videos here and below

A man carrying an AR-15 rifle outside the Phoenix Convention Center where President Barack Obama was speaking today has renewed concerns about protesters bringing firearms to presidential events.

"It is extremely disturbing that you have that kind of weapon in close proximity to where the president is," said Ruben Gallego, a military veteran and Arizona Democratic Party official who observed the man.

"He was demonstrating his Second Amendment rights," Gallego added, "but he was clearly there to intimidate people who were there exercising their First Amendment rights."

Neatly dressed in a white shirt, black tie and gray slacks, the man, who only gave his first name as Chris, also had a pistol holstered at his side as he engaged in heated debates with those rallying in support of Obama's heath-care reform plan.

A Phoenix police spokesman said plainclothes detectives were monitoring about a dozen protesters carrying guns, though no one broke any laws or was arrested.

Arizona is an "open-carry" state, which means anyone legally allowed to have a firearm can carry it in public as long as it's visible. A permit is required if the weapon is carried concealed.

"Because I can do it," Chris said when asked why he brought guns to the rally at 3rd and Washington streets. "In Arizona, I still have some freedoms left."

Gallego, who served a tour of duty in Iraq, said he believes the AR-15 semi-automatic rifle was loaded. He spotted a magazine in the firearm and another in the man's back pocket.

Obama was inside the downtown convention center, addressing a national gathering of the Veterans of Foreign War. The president's motorcade entered and exited the facility about a block away from where protesters and supporters were staged.

"We're here to keep the peace. If we need to intervene, we will intevene at that time," said police Detective J. Oliver, one of three officers shadowing the man with the rifle.

Last week, during Obama's health-care town hall in Portsmouth, N.H., a man with a pistol strapped to his leg held a sign reading: "It is time to water the tree of liberty." It was a reference to Thomas Jefferson's quote, “The tree of liberty must be refreshed from time to time, with the blood of patriots and tyrants.”

Earlier at the event, another man was arrested for having an unlicensed gun in his car at the school where Obama spoke.

In response to the armed demonstrators in Phoenix, Paul Helmke, president of the Brady Campaign to Prevent Gun Violence, called on the National Rifle Association and other gun-rights groups to tell their members to leave their weapons at home when attending presidential events.

"The possibility that these weapons might be grabbed or stolen or accidentally mishandled increases the risks of serious injury or death to all in attendance."

Calls to several NRA officials in Arizona were not returned.

The Associated Press contributed to this story.

From an outraged CNN:

Interview with gun-toting protester at Obama rally was staged

PHOENIX, Arizona (CNN) — He was to demonstrating his right to bear arms — and he wanted you to know it.

Video of the unidentified man toting an assault rifle outside President Obama’s speech to veterans Monday was aired all over the country, causing a buzz about weapons popping up — legally — around recent presidential events.

The protester, who refused to give his name, was interviewed by a man carrying a microphone and said, "I am almost always armed."

"Absolutely," Hancock told CNN’s Rick Sanchez Tuesday. "You guys are so easy. What we wanted to do was make sure that people around the country knew that law enforcement in Phoenix, Arizona, protects our rights."

The Phoenix-based host of "Declare Your Independence with Ernest Hancock" identified the bespectacled man with the AR-15 semi-automatic assault rifle as "Chris," saying he’s known him for two years as part of a younger generation of Libertarians.

"We are up against a tyrannical government that will rob the next generation as long as they can get away with it," Hancock said…

And while Hancock admitted the interview was staged, he insisted the protester’s message was not.

"I come from another state where ‘open carry’ is legal, but no one does it, so the police don’t really know about it and they harass people, arrest people falsely," the protester identified as Chris told Hancock in an interview aired by CNN affiliate KNXV. "I think that people need to get out and do it more so that they get kind of conditioned to it."

Video from KNXV shows the man standing with other protesters, with the rifle slung over his right shoulder, a handgun in a holster on his left hip, and a bullet clip in his back pocket.

The same protester told KNXV separately, "I’m exercising my rights as an American in Arizona."

The protester was among a dozen other demonstrators carrying unconcealed guns outside the Obama event.

Hancock, who said he was packing a 9-millimeter Beretta pistol, added that Phoenix police had known about the group’s intent to protest while carrying guns…

Arizona law has nothing in the books regulating assault rifles, and only requires permits for carrying concealed weapons. So despite the man’s proximity to the president, there were no charges or arrests to be made, according to Phoenix police…

Phoenix police spokesman Sgt. Andy Hill on Monday said officers explained the law to some people who were upset about the presence of weapons at the protest…

Hill told CNN on Tuesday that the widely broadcast protest was no different than any other for law enforcement, in that investigators with the "community response unit" had communicated with the group ahead of time…

He added that because of Arizona’s open carry law, it’s not uncommon for protesters to pack heat at demonstrations.

Gun-toting protesters have demonstrated around the president before. Last week, a man protesting outside Obama’s town hall meeting in New Hampshire had a gun strapped to his thigh. That state also doesn’t require a license for open carry…

Asked whether the individuals carrying weapons jeopardized the safety of the president, Donovan said, "Of course not." …

Of course CNN is being just a little disingenuous here. This wasn’t "staged" in the sense that it was pretending to be something it was not.

The "bespectacled" protester is a real libertarian who believes in our Second Amendment rights and brought his gun to protest Mr. Obama’s anti-gun policies.

The only thing that could be conceivably considered "staged" is that the libertarian radio talk show host knew about him, and knew he was going to interview him about the gun. That is, the radio host didn’t just happen to bump into a total stranger at the protest.

That is not "staged" in the sense we usually mean when talking about such things.

Fortunately for us, our media never stages such things.

Though for some odd reason CNN and the rest of our watchdog media seemed determined not to give us a full look of ‘Chris’ the protester in any of their still photographs.

(The photo at the top, for instance, is from our screen grab from the local station’s interview.)

Instead, in every still photograph our media masters seemed to prefer just to show the rifle, while artfully cropping the man’s face.

You would never know the protester was a clean cut (and articulate) black man.

That’s what we call “staged.”

(Thanks to Ann for the heads up.)