Check out the Related Links and Videos Below Too ! 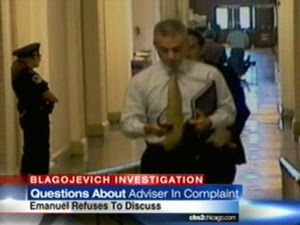 WASHINGTON – Republicans are criticizing President-elect Barack Obama's silence over contacts his aides may have had with disgraced Illinois Gov. Rod Blagojevich, saying he is breaking promises to bring openness to government.

"While it is encouraging that the president-elect has stated his office will disclose contacts with the scandal-ridden governor, it remains disappointing that his actions are in response to political pressure," Republican National Committee Chairman Robert M. "Mike" Duncan said.

"Americans expect the highest degree of transparency from their elected leaders, rather than promises of openness on the campaign trail," he said.

Rahm Emanuel, who has been tapped by Obama to be his White House chief of staff, had conversations beginning just before the Nov. 4 election with Blagojevich's administration about who would replace Obama in the Senate, according to a report Saturday in the Chicago Tribune.

Emanuel, a Chicago congressman who has long been close to both Blagojevich and Obama, gave Blagojevich's chief of staff a list of Democrats acceptable to Obama to fill the Senate seat, according to the Tribune report. The report did not suggest there was any dealmaking in the conversations, which were captured on court-ordered wiretaps.

Obama said Friday he will release in a matter of days the results of an internal investigation into what conversations his aides and advisers may have had with Blagojevich, who has been accused of trying to sell Obama's Senate seat.

Obama's staff has declined to respond to even basic questions, like who is conducting the probe, how long it will take, what issues are being explored and whether they are working with federal investigators. While Obama has promised openness throughout his service, his staff has locked down on inquiries for now.

The Obama transition team's refusal to talk has contributed to a maelstrom around Emanuel. Blagojevich was arrested this week in a corruption scandal.

But Emanuel is not a target of the probe, according to people who have been briefed on the investigation.

The two people spoke on a condition of anonymity because the criminal investigation is ongoing. One is a person close to Emanuel, who said he has been told by investigators that he's not a subject of their probe.

Asked if any conversations between Emanuel and Blagojevich were captured on government wiretaps, Obama spokesman Robert Gibbs said, "I honestly don't know." Other transition officials refused to respond to inquiries.

There are no suggestions that Obama or his aides were involved in the alleged sale of his seat. U.S. Attorney Patrick Fitzgerald said prosecutors were making no allegations that Obama was aware of any scheming. And Blagojevich himself, in taped conversations cited by prosecutors, suggested that Obama wouldn't be helpful to him and the governor called Obama a vulgar term. Even if the governor was to appoint a candidate favored by the Obama team, Blagojevich said, "they're not willing to give me anything except appreciation."

Obama told reporters Thursday that he never personally spoke to Blagojevich about who would fill the seat he resigned to take over the presidency next month.

"What I want to do is to gather all the facts about any staff contacts that may have taken place between the transition office and the governor's office," Obama said. "And we'll have those in the next few days, and we'll present them. But what I'm absolutely certain about is that our office had no involvement in any dealmaking around my Senate seat. That I'm absolutely certain of."

Another question that Obama's staff didn't answer is how he knows that his office had no involvement if he has yet to gather all the facts about conversations they had with Blagojevich's office. Speaking on the condition of anonymity, transition officials said they do not want to release any information on the internal review until it is completed.

The normally press-friendly Emanuel has shut down reporters who've been trailing his every move trying to confirm if he's the "president-elect adviser" referred to in the criminal complaint against Blagojevich. Emanuel grew testy with a Chicago Sun Times reporter who approached him at his children's recital and an ABC News cameraman who had been staking out the Emanuel home for hours and was allowed to come in and use the bathroom.

Emanuel told the cameraman he's angry at the networks who have put his home address on national television.

"I'm getting regular death threats," Emanuel said, according to an ABC report. "You've intruded too much."

The Sun-Times reported that Emanuel pushed aside the reporter's recorder and said he wouldn't talk. "I'm not going to say a word to you. I'm going to do this with my children," he said.

The spotlight has fallen on Emanuel in part because conversations secretly recorded by federal investigators suggest Blagojevich wanted to raised large charitable donations in exchange for a favor involving the Illinois 5th District congressional seat that Emanuel plans to vacate to work in the White House.

The complaint says that a week after Obama chose Emanuel as his chief of staff, Blagojevich told an aide that he wanted the unnamed "president-elect advisor" to be told of the governor's interest in creating a nonprofit group, and "can you guys help him . . . raise 10, 15 million"?

Quoting Blagojevich talking about the adviser, it continues: "When 'he asks me for the Fifth CD thing I want it to be in his head.'" The complaint says Blagojevich was trying to determine whether he had the power to appoint an interim replacement until a special election for Emanuel's seat could be held.

But Blagojevich was wrong if he thought he might have that power. By law, House vacancies can be filled only by elections.

The complaint does not say that a conversation with the Obama adviser took place, nor does it suggest that the Obama team took any action regarding Blagojevich's idea for a nonprofit.

Who is John Harris ( Gov. Blagojevich Chief of Staff) ?

The global elite will not rest until they have undermined the last bastion that stands in their way as they attempt to dominate and subjugate of the once great republic of the United States — the Constitution and the Bill of Rights.
Posted by JRohio at 10:05 AM