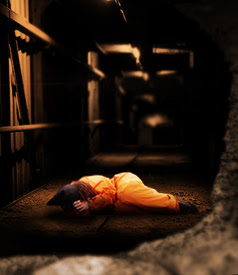 The state board responsible for licensing - and disciplining - psychologists in Louisiana is "fighting awfully hard to turn a blind eye to serious allegations of abuse" brought against one of its members, who is being accused of complicity in beatings, religious and sexual humiliation, rape threats and painful body positions during his service as a senior adviser on interrogations for the US military in Guantanamo Bay and Abu Ghraib.

That is the view expressed to Truthout by Deborah Popowski, cooperating attorney with the Center for Constitutional Rights (CCR), part of the legal team representing Dr. Trudy Bond, an Ohio-based psychologist, who is suing the Louisiana State Board of Examiners of Psychologists to compel it to investigate the behavior of Louisiana psychologist and retired US Army Col. Dr. Larry C. James, a former high-ranking adviser on interrogations for the US military in Guantanamo Bay and Abu Ghraib.

"We wish the Board would devote its resources to investigating unethical conduct instead. Everyone, including the people of Louisiana, would be better served," she told Truthout.

The chairperson of the Board, Dr. Jillandra Rovaris, who also chairs the complaints committee, did not respond to telephone calls or emails from Truthout, seeking comment and clarification.

Popowski says that, according to his own statements, Dr. James played an influential role in both the policy and day-to-day operations of interrogations and detention at the prison camps. She claims that publicly available information shows that "while Dr. James was at Guantanamo, abuse in interrogations was widespread, and cruel and inhuman treatment was official policy."