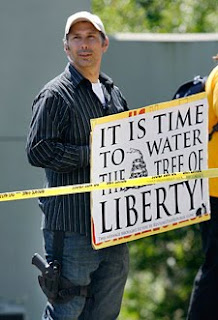 A man carried a handgun strapped to his leg to a town hall meeting being held by President Obama in Portsmouth, New Hampshire on Tuesday.

It's legal for him to have the gun as long as it is unconcealed, the police told MSNBC. The man was on private property -- church ground on the roadway leading to the high school where Obama would speak. The church gave the man permission to be there. However, according to police officers, he is under constant surveillance and is not anywhere near where the president will speak.

Talking Points Memo points out that the man was carrying a sign referencing this Jefferson quote: "The tree of liberty must be refreshed from time to time, with the blood of patriots and tyrants." 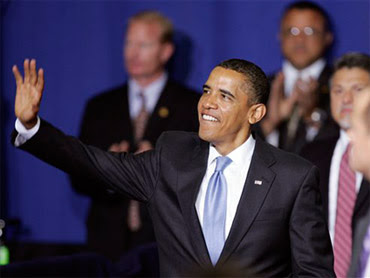 New Hampshire state law is pretty clear about protecting its citizens' rights to carry firearms in public. Carrying a pistol or revolver openly is permitted without a license; carrying a concealed weapon requires a license from the state or local police.

William Kostric took advantage of that law on Tuesday to show up outside President Obama's Portsmouth, N.H. town hall meeting and hold a sign saying "It Is Time To Water The Tree Of Liberty." That invokes a phrase from a letter written by Thomas Jefferson: "The tree of liberty must be refreshed from time to time with the blood of patriots and tyrants."

Kostric did not immediately respond to an interview request from CBSNews.com.

Portsmouth police spokesman Lt. Frank Warchol told the Boston Globe that because Kostric was on private property -- it belongs to a church near the school with the town hall meeting -- he would not be arrested. "We can't do anything about it," Warchol said. "Obviously he's on our radar screen at this time."

Kostric was there around 11 a.m. ET, before Mr. Obama even left the White House en route for the Granite State, and there's no indication he ever laid eyes on the president. Nevertheless, around that time (11:35 a.m., to be precise) MSNBC's Carlos Watson called for Kostric to be forcibly disarmed: "I cannot imagine that there aren't enough lawyers in New Hampshire who can't file some sort of emergency injunction." One of his guests added: "Why can't we get rid of him now?"

MSNBC's Chris Matthews invited Kostric on his show and wondered why "you're carrying a goddamned gun at a presidential event?" (Kostric's reply: He was there peacefully, guns aren't unusual in New Hampshire, and Americans lose rights unless they exercise them.)

One MSNBC.com report indicates that Kostric was approached by a detective, possibly a Secret Service agent, who told him he could be arrested within 1,000 feet of a school with a weapon under a federal law.

Some background: the 1990 Gun-Free School Zones Act said that it "shall be unlawful" to possess a firearm within 1,000 feet of an elementary or secondary school.

That law is no longer on the books. In the case of U.S. v. Lopez, decided in 1995, the U.S. Supreme Court said violated Congress' powers to regulate interstate commerce and was therefore unconstitutional.

Congress re-enacted a version in 1996 with a narrower definition of interstate commerce; it says the statute does not apply "on private property not part of school grounds" or to anyone with a carry permit, with Kostric may or may not have.

It's reasonable to not understand the intricacies of gun laws; many vary from state to state, and few are written especially clearly.

But you'd hope that television commentators would take the time to learn at least a little before calling for measures such as court injunctions and disarming by police. One thing that MSNBC's hosts could have added is that a lawsuit filed last week in Washington, D.C. seeks to establish a broad Second Amendment right to carry firearms in public -- which, if successful, could mean that William Kostric's exercise in public handgun ownership will become much more commonplace.
Posted by JRohio at 12:40 PM