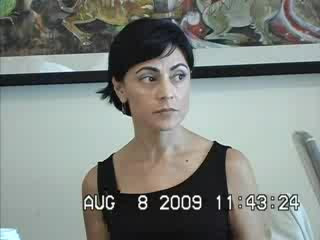 Krikorian opposed Schmidt in the Second District Congressional race as an independent in 2008 and is seeking the Democratic nomination for the 2010 race in April. The complaints focus on Krikorian's statements during the election stating that Rep. Schmidt was taking money from organizations related to the Turkish government in exchange for denying the occurrence of what Krikorian called the Armenian Genocide at the hands of the Turks during World War I.

In preparation for the Sept. 3 hearing, Krikorian's lawyer requested a subpoena for well known whistleblower and former interpreter for the FBI, Sibel Edmonds. The OEC declined to enforce the subpoena, however Edmonds agreed to speak to Krikorian and Schmidt's lawyers on a voluntary basis.

The video deposition was brought forward by Krikorian's counsel to provide background on the alleged involvement of the Turkish government in Congressional affairs through blackmail, bribery, and campaign contributions filtered through various organizations. Edmonds also describes Turkish infiltration of the Pentagon and Air Force.

Edmonds' deposition is significant because she has twice been "gagged" by a State Secrets exemption from testifying for a 9/11 investigation and a Congressional hearing.

By various Internet bloggers she has been called the most gagged woman in the U.S.

As the Sept. 3 OEC hearing approaches, the depositions continue. Licoln McGurdy, Treasurer of the Turkish Coalition USA PAC was the recent subject of a deposition and Schmidt was to be deposed Monday, Aug. 24.

Edmonds (who is Turkish-American) called as a witness for Krikorian (who is Armenian-American) testified to infiltration, bribery, corruption, and blackmail within the U.S. Government, by current and former members of the U.S. House and other high ranking officials, on behalf of Turkish interests.

Schmidt filed the complaint with the OEC alleging "false statements" by Krikorian when he alleged she had taken "blood money" from those opposed to a Congressional declaration of Armenian Genocide by the Turks during WWI.

Below is the video deposition by Edmonds. Some serious charges are made in this deposition, this newspaper/website provides this as public information that readers/viewers may develop their own opinions and understandings of the subject. Note most of Edmonds' deposition is relevant to a time period previous to Rep. Schmidt taking office.