After the huge success of Sacha Baron Cohen's films Ali G In Da House and Borat: Cultural Learnings Of America For Make Benefit Glorious Nation Of Kazakhstan, you'd think people would have wised up to the comedian's disguises.

But it appears not everyone recognises the comedian when he's dressed up as his third alter-ego, gay Austrian fashion reporter Bruno.

Texas congressman Ron Paul, who was a Republican candidate for the 2008 presidential election, was left fuming after he was unwittingly tricked into a hotel room with Cohen's Bruno character. 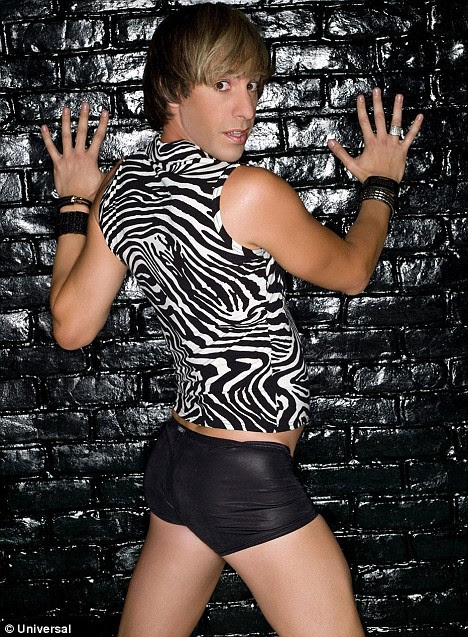 How do I look? Sacha Baron Cohen attempts to strike a seductive pose as Bruno

The right-wing politician was tricked into being a target of seduction by Bruno last summer by posing as an economic reporter. 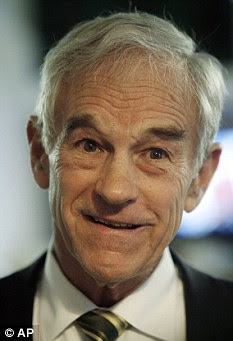 After Paul briefly appeared in the trailer for Cohen's forthcoming film Bruno: Delicious Journeys Through America For The Purpose Of Making Heterosexual Male, he realised he would have to explain himself to voters.

Speaking on America's ABC radio this week, angry Paul condemned Cohen for lying and accused him of 'fraud'.

During an interview with presenter Curtis Sliwa, Paul was asked how he ended up in a hotel room in such a compromising situation.

He said: 'We were in a studio situation, I wasn't invited into a hotel room. There were lots of lights and blaze and commotion and they said we better get in this back room which had been fixed up as a bedroom.

'So there was some dishonesty getting me into the interview, I was expecting an interview on Austrian economics. That didn't turn out that way.

'By the time he (Cohen) started pulling his pants down, I was like what on earth is going on here and I ran out of the room. This interview had ended.'

In what is sure to be hilarious viewing in the upcoming film, Paul is stunned when Bruno starts to disrobe in front of him. 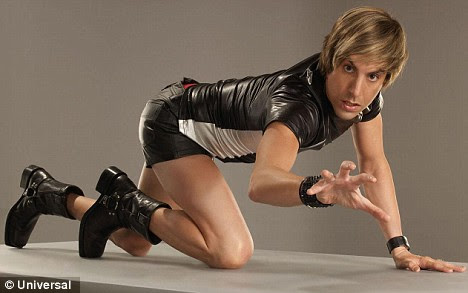 Wild thing: Bruno has a penchant for hotpants and PVC

Paul said: 'I don't like the way he lies his way into interviews. That to me is fraud.

'He has raunchy material people buy into it's sort of sad that it's a reflection of our culture.It's a real shame people are gonna reward him with millions and millions of dollars for being so crass.'

Cohen, who also wrote and produced the movie, was forced to re-edit the movie after American censors gave it a NC-17 rating, which meant under 17s would have been banned from seeing the film.

After the Borat move took an amazing $261million in takings three years ago, Cohen wants the Bruno film to have the same potential audience. 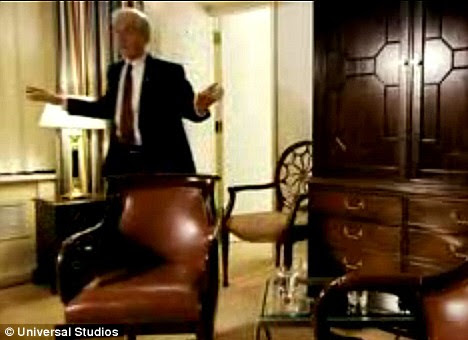 This interview is OVER: Paul storms out of the room after Bruno starts to disrobe

Cohen and director Larry Charles have now toned down some of the more sexual scenes, prompting the Motion Picture Association of America (MPAA) to reclassify it with an R rating, which means under 17s can see it with a parent or guardian.

The comedian filmed Bruno in America and Europe over last summer.

In September, his Bruno character caused chaos at Milan Fashion Week when he jumped on to the catwalk of the Agata Luiz della Prada show.

Cohen also pokes fun at Madonna's adoption of Malawi toddler David Banda when he collects an African baby out of luggage at an airport.

Just like Madonna's appearance on U.S. chat shows following her controversial adoption of David - whose biological father is still alive, Bruno appears on TV to defend his adoption of the baby. 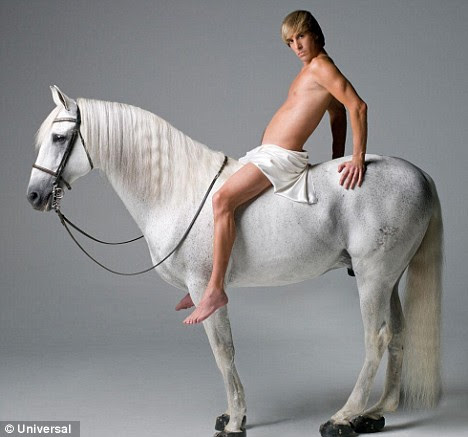 'I gave him a traditional African name - OJ.'

Bruno was first seen alongside another famous Cohen creation, Ali G, on The Ali G Show.

The movie is being shot in the same documentary style as 2006's smash hit Borat: Cultural Learnings Of America For Make Benefit Glorious Nation Of Kazakhstan.

• Bruno: Delicious Journeys Through America For The Purpose Of Making Heterosexual Male is set for release in the UK on November 2.