Alex Jones interviews Jeffrey Smith , the author of Genetic Roulette
and Seeds of Deception who will address GMO foods and other health issues.


Controlling our food: a new documentary was aired on French television - a documentary that Americans won’t ever see. The gigantic bio-tech corporation Monsanto is threatening to destroy the agricultural biodiversity which has served mankind for thousands of years


The World According to Monsanto (30 minutes extract) 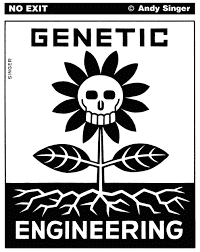